On November 6th at the Infinity Center in Denver, in front of a packed room of technology professionals, the Colorado Technology Association held their 19th annual APEX Awards, recognizing the best of the best from around the state. Alan Buller from Fremont Economic Development (FEDC), was awarded “Talent Champion of the Year” for 2019. Alan was recognized for his work with the tech sector portion of Canon City High School’s internship program, hosted at FEDC’s award winning rural co-working and incubator facility on historic Main Street in Canon City.

Alan was also interviewed in Denver Business Journal, CTA APEX Awards: Alan Buller resists retirement for rural revitalization, and described the evening in his own words…

“Yes, at Wednesday night’s APEX Awards, I received the Talent Champion of the Year Award from the Colorado Technology Association. Though I knew I was one of three finalists, I certainly did not expect to win…” 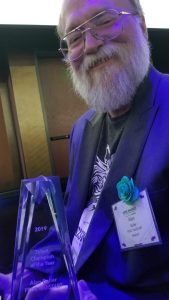 For more information, download the FEDC Digital Area Profile Brochure. It is a very large file with plenty of pretty pictures so please be patient while it downloads.

The FEDC Quick Response Team is comprised of several local business people that know how to get projects started – bankers, lawyers, building officials, FEDC members and anyone else that might be able to represent the community and keep a prospect on track.

The Quick Response Team can help a new or relocating business to find instant help for their business.